Please note for data protection, certain information has been removed from these pages.

“The Best Unofficial Ambassador for Scotland” –
The most frequent comment made overseas regarding Charles Harris and his traditional artwork – by journalists and art lovers alike in countries including the USA, Russia, China and Italy.

On the World Tour, Charles subsequently received numerous Television and Radio Interview requests, as well as Newspaper and Magazine Features or Reviews.

> Guardian Weekend Arts by Michael McNay in a feature entitled ‘Light at the End of the Tunnel’, following the display of the picture at the Royal Academy Summer Exhibition. (see below) 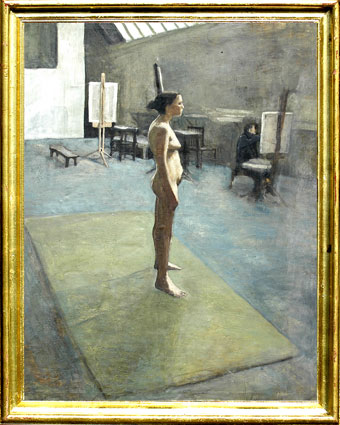 From the Life Painting Room at the Royal Academy

> Whilst he was still a student, Britain’s leading art critic, Brian Sewell reviewed Charles’ work and commented on how he had “modestly eschewed the national painting prizes” in a colored centerfold review for Tatler magazine where he chose Charles as being, “One of the six best painters for the future.” 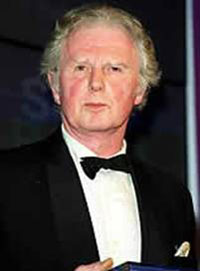 Charles’ first Television and Radio, Newspaper and Magazine reviews were as follows –

> Craig Miller – News Feature – Grampian Television – “We are really pleased with the whole production. The coverage of the paintings and your personal interview were excellent.”

> Cameron Simpson – The Glasgow Herald UK – (colour feature) – “The Scottish Landscape artist was invited by the Taipan of Hong Kong, reputedly the sixth wealthiest man in the world, after seeing Harris’ paintings in New York. It is work that also captured the imagination of Tony Blair and his wife.”

> Lesley Riddoch BBC Television and Radio Scotland – Live Broadcast – “Charles has been the lone voice in the wilderness for Traditional Art.” 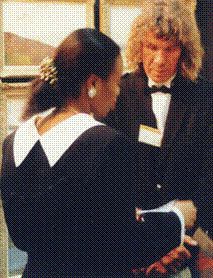 HRH The Queen of Swaziland with Charles Harris MA BA

“I admired the beauty in these pictures and the reality they conveyed. I immediately recognized their importance. In South Africa we have seen a lot of abstract, semi-abstract and conceptual style Art brought into our country but we did not find it convincing.”
HRH Queen LaNgangaza of Swaziland 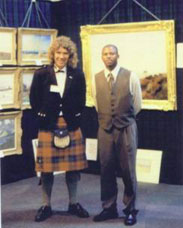 In an official statement Prince Cedza Dlamini said –
“I am impressed by Charles Harris’ New Traditional style and I plan to promote it in South Africa and Swaziland.
The Queen herself was impressed by the paintings of Charles Harris and requested to meet him personally.
This new traditional style art by Charles Harris we find very real. The parallels between this Art and our country are very obvious.
It looks forward to a new future while looking back to a great tradition.”
Prince Cedza Dlamini of Swaziland Ambassador for Swaziland, South Africa.

> Gillian Harris – The Times Newspaper UK – ”Charles Harris was chosen by Queen LaNgangaza of Swaziland, one of King Mswati III’s eight wives. She saw his paintings of wintry landscapes at an exhibition in South Africa and sent a message that she wished to see him. This Scottish artist will the first Westerner to paint an official portrait of an African Royal Family. Arrangements for Mr. Harris are being made by the King’s brother, Prince Cedza Dlamini, husband of Nelson Mandela’s daughter Zenani.”

Two independent television broadcasts at the Scottish Exhibition and Conference Centre in Glasgow UK. Plus a radio broadcast live from Charles’ Exhibition at the SECC.

The following day a one-hour long live feature and personal interview on Russian network television (their equivalent to the BBC) about the artist’s work and the future of European Art.
Russian Network Television (one hour live interview) their equivalent to the BBC. (As a result, Charles spent the rest of the Exhibition signing autographs for thousands of well-wishers.) 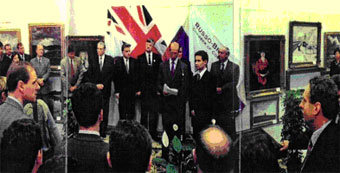 > After the opening of the Exhibition, Charles received a special return invitation to Russia by the Regional Administration to take part in the Peter the Great 500th Celebrations in Moscow the following year.

> At Art Expo New York, Charles was asked if he would consider relocating to America by many gallery owners attending the exhibition who wished to exhibit his work in the USA.

> Scottish Clan President The Gathering of the Clans Red Springs S. Carolina USA news and reviews – “These portraits and landscapes we can all look at and treasure.”

> In Hong Kong Charles Harris was requested for radio, television and newspaper features. These included three Chinese newspapers one of which has the biggest circulation in Hong Kong:

> Miss Cecilla Chan – Sine Bo – “Charles Harris has artistic ambitions higher than the clouds. At his breathtaking traditional show I asked of two paintings, a landscape and a portrait: Was this his home and was this portrait the love in his life?” 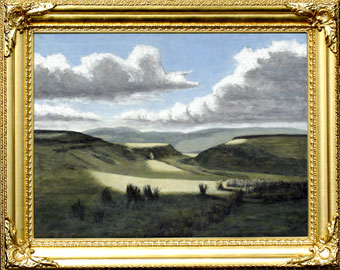 Sunlight over the Hills Perthshire

“I guessed correctly! The landscape was a view of the back of his house in the central hills in Scotland and the portrait was his (ex) fiancé. It is sparkling clear for all to see and all should go! Charles paints portraits from the heart and a true spirit walks proudly in his landscapes.”
Miss Cecilla Chan – Sine Bo Newspaper Hong Kong

> Steven Bell – The Courier – “Court sits while artist captures place in history – a Perthshire artist has booked his place in the history books. Charles Harris was yesterday putting the finishing touches to what is believed to be the first picture completed during a High Court session since Victorian times.” 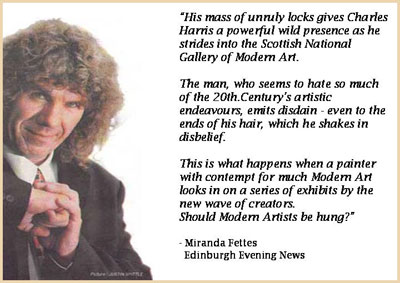 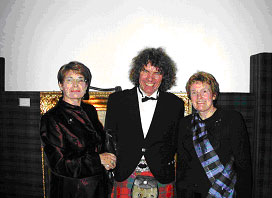 Charles pictured with the Director of the British Institute Christine Wilding (who provided the translations) and the British Consul General Moira McFarlane who opened the Exhibition in Florence Italy. 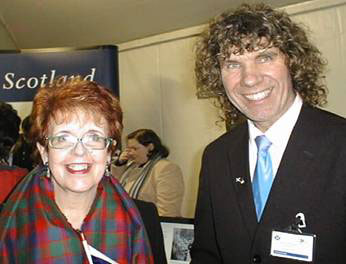 Charles pictured with the Rt..Hon..Lord Provost of Glasgow Elizabeth Maxwell who opened the Exhibition in Florence Italy.

Lord Provost of Glasgow Elizabeth Maxwell – “Your landscapes of the Perthshire hills are beautiful. They remind me of the Lomomd hills.” 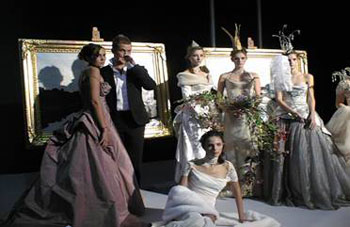 The Models from Models One pictured with Charles’  work at Earls Court London.

> First year – Thousands of visitors to the Italian Exhibition – ‘Viva Italia’ were given feedback sheets with their show programmes. The show manager Gianfranco Caputo said, “The main listed event was the Italian fashion show with its leading designer. The fashion show received 28% of the vote and Charles received 27%.”

> Second year – The support for Charles’ talks was overwhelming.

The best review was from – Martin Herbert –
“We were impressed with the presentations held on the main stage, particularly Charles Harris – the art lecturer – who incorporated his passionate views into an extremely informative and entertaining lecture – we have never seen anything like it – more please!” 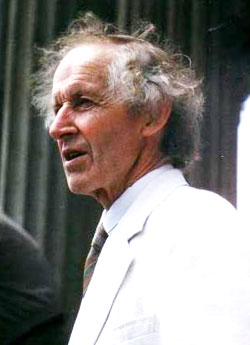 > Prof. David Morris – Royal Academy Art Historian – “I worked with Charles Harris previously when he was a student of mine at the RA Schools and afterwards on several projects, including a video from the National Gallery London. I recognized in him a young man with a remarkable talent for perceptive observation and a direct expressive handling of the visual language. His academic work, for which I was more particularly responsible, had the same qualities. He was good at getting to the heart of the matter and had an enviable knack for the succinct phrase. He seizes on what is worthwhile and does not pursue ideas beyond their relevance. As we agree on so many things – it is only natural that I consider that he has excellent judgment.”

This picture below, entitled ‘The Road from Murrayshall’, was chosen by Rob Ingram Managing Director of Advanstar (the event organisers of Art Expo New York USA)…..“The more you look, the more you see.” 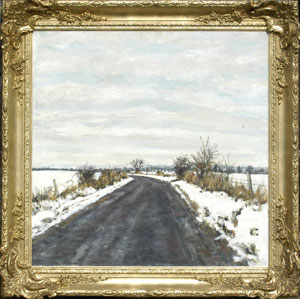 ‘The Road from Murrayshall’ by Charles Harris

“The best picture in the biggest art show in the world”.

“It is interesting work, capturing the beauty of the area very well.”
The Prime Minister of Great Britain, the Rt. Hon. Tony Blair MP, referring to Charles’ most popular and prestigious painting‘The Road from Murrayshall, Perthshire’. (above)

“These pictures are spring flowers emerging from a long winter of poor 20th century paintings without stomach or heart.”
The President of the Tartar Republic of Kazan, Russia (one of Boris Yeltsin’s deputies).

“Looking at this work, I have never learned so much about painting in such a short period of time.”
Mr Padraig Flynn, European Commissioner, Dublin, Ireland. 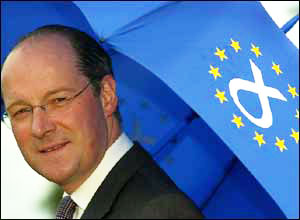 “Charles Harris is the founder of a new art movement. His work and ideas have received international acclaim. It’s ridiculous that people in art today can’t understand! Charles paints the Scottish countryside we see everyday. His pictures are beautiful, inspiring and real.”
John Swinney MSP, former leader of the Scottish National Party, The Scottish Parliament.

“It is a clever idea to export British Paintings and Culture.”
Baroness Smith referring to Charles’ World Tour Exhibition in Russia.

The Rt. Hon. Alban Maginness (see script below) the BBC and Channel

“Real Art of an incredibly high standard. Thank you for bringing this Art to the Province.”
The Rt. Hon. Alban Maginness Lord Mayor of Belfast

“Looking at these pictures, I know immediately what Scotland looks like, feels like and smells like. The language of these paintings is international.”
The Governess of the Schools of Niznhy Novgorod.

“Charles has been the lone voice in the wilderness for Traditional Art.”
Lesley Riddoch BBC Television and Radio Scotland

“It is a great pleasure to look at real Art that one can immediately identify with.”
Desmond Perry Northern Ireland Leading Magistrate

“When he is not travelling, wearing his trademark kilt and earning the plaudit from one critic as ‘Scotland’s best unofficial ambassador’, Charles can be found in some of his favourite spots in Perthshire.”
Agnes Stevenson – Features Editor, Glasgow Evening Times

“I saw this work and immediately knew this is what we wanted as the first point of contact to represent Scotland.”
Caroline Smith Scottish Ports Authority, Dundee, Scotland. 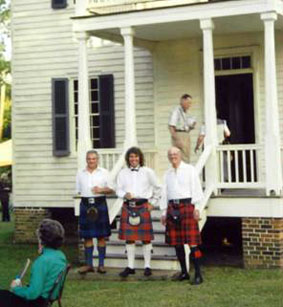 “Here in Carolina we agree with Mr Harris; we don’t want any of that jiggery-piggery. If we Americans are gonna pay for British art then we want something that everyone can recognise. We like these pictures by Charles Harris. These portraits and landscapes we can all look at and treasure.”
Scottish Clan President, Heart of Scotland Festivals, North Carolina, USA.

“Charles Harris is a grandmaster craftsman and his Painting is grandmaster creativity on a par with the assembly of ground-breaking scientific matter in Science or Physics”
Victoria Harding, MA. International Exhibitions Co-ordinator. 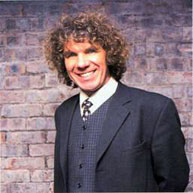 “Great Art should educate, inform and dynamically reaffirm the experience of life for us all.”
Charles Harris MA BA